Bagini Glacier Trek is a beautiful place in the Himalayas. It starts near the bases of the Trishuli and Changbang peaks and flows northwards from there. The entire feature is located inside Nanda Devi National Park, which has rich flora and fauna. With the Bagini Glacier and Changbang Base Camp, you get a chance to literally walk on this large river of ice, and also explore the national park. Your first stop will be the sacred town of Haridwar, known for its multitude of temples, important pilgrimage sites, and a plentiful of yoga ashrams and resorts.

You then drive to the town of Joshimath, where the famous 8th-century Hindu saint Shankaracharya established a monastery. The journey will take you past Rudraprayag, Karnaprayag and Devprayag, where several source-streams of the Ganga River meet. Joshimath is the only proper town before your trek begins, and whatever supplies you need for the expedition have to be bought here. After procuring all the necessary goods, hop into the vehicle again, and this time drive along the Dhauliganga River to Jumma. Just as you reach here, you will be greeted by fierce winds coming from the Tibetan Plateau as the place is near to it. Make your way through them and get a taste of what you will get at higher altitudes.

From here your trek to Bagini Glacier commences. The first section of the excursion is easy, and the roughly 3 km distance to Ruing is covered in just 2-3 hours. A scenic backdrop of conifers and snowy peaks, and traditional brick and stone houses make Ruing an ideal place to camp. You could rest at the Panchayat Ghar if the village elders allow, and if not, hike a little more and set up camps on a picturesque meadow. The next morning, continue the expedition and reach Dronagiri, which lies amidst expansive and gently sloping alpine grasslands. From here, barren mountains and numerous snow-covered peaks including Dunagiri are visible. Do not forget to capture this scenery in photographs.

Day 1: Haridwar to Joshimath
On arrival in the holy town of Haridwar, board a vehicle and drive to Joshimath. If Haridwar is reached in the morning, the drive can be undertaken the same day. Joshimath is roughly 256 km from Haridwar, and the distance can be covered in roughly 4 hours 40 minutes if the traffic is smooth. The drive will be through several sacred places like Devprayag, Rudraprayag and Karnaprayag. On the way, enjoy breakfast and lunch. Once in Joshimath, transfer to your lodging for an overnight stay.

Day 2: Joshimath to Jumma | Trek to Ruing (2800 metres)
Early in the morning, drive to the village of Jumma, from where your Bagini Glacier trek will begin. Whatever essential supplies you need for the expedition should be bought here, as there will not be a proper town further on the way. In ideal traffic conditions, you should be able to cover approximately 46 km between the two places in about 2 hours. On the way, you will drive through many small villages like Tapovana, Reni, Lata, Phagti and Suraithota. The road meanders along the Dhauliganga River from Jumma till Suraithota, which makes the journey quite scenic.

Jumma experiences strong winds as it is near the Indo-Tibetan border, and your adventure might start here itself as you try to force your way through high-velocity winds. You cross a steel bridge over the Dhauliganga River, and then you’re trekking in Bagini Glacier begins. Your first halt will be at Ruing village, where you will camp at night. The hike is not difficult, and you will be able to cover the roughly 3 km distance in about 2-3 hours. At around 2800 meters above sea level, Ruing is a beautiful settlement, located on gentle slopes and amidst lush coniferous forests of firs, deodars and spruces.

If the village elders allow, you may stay the night at the local Panchayat Ghar, which is not always a possibility. What you can do is trek further for 2-3 km from the village, till you reach a picturesque meadow. This grassland offers two advantages: it is near to Dronagiri, where you go next; and it has a stream flowing through it, making it a pretty sight. On reaching here, erect tents and enjoy a comforting overnight stay in the mountains.

Day 3: Ruing to Dronagiri (3610 meters)
From Ruing, recommence your excursion and travel to the village of Dronagiri. You walk along a well-defined path that heads deeper into forests. It is the only path here, with no junctions and diverting minor tracks. The journey brings a lot of ascending and descending, after barely 4 km from the campsite, you will reach the landslide zone, and here you will see two paths going in different directions. Do not follow the one that heads upstairs because it was destroyed by glacial activity years ago. As a result, a canyon has formed there which will require the help of an expert mountaineer to cross.

Take the narrow track that heads down, and on the way you will encounter numerous brooks, crossing your path. Post walking for some distance on this rocky and dusty trail, you will come to a cemented road that will get you to Dronagiri village. The village, at roughly 3610 metres above sea level, lies in the alpine grassland ecological zone. From the topmost point in the area, numerous snow-clad peaks of the Garhwal region including Dunagiri are visible in the horizon.
You have some free time here and you may utilize it to hike a little higher and visit the temple of Bhumial, a local deity. In the evening, walk to the outskirts of the village to set up camps and stay overnight.

Day 4: Dronagiri to Longatulli
This day leave Dronagiri village early in the morning. As you recommence your expedition, you will at once encounter a steep ascent, which will take you to a ridge. Look around from atop it and see Rishi Pahar, a mountain located in the Pithoragarh district of Uttarakhand. Post a trek of approximately half-an-hour from Dronagiri, you will cross a stream, called Bagini Nallah, via a bridge made of concrete. There is a path that goes left before the bridge. Do not follow it as it will take you to Garpak village via Kanari Khal.

After you cross Bagini Nallah, you will again start climbing through the Himalayan Mountains. The path will be winding, and full of rocks and boulders. By now you would have crossed the point, beyond which nothing grows and only brown, barren slopes are seen. You now descend for some time till you reach the banks of another pretty stream. Here you will reach post walking for roughly one hour 15 minutes from the Bagini Nallah Bridge. The land here is covered with grass, and many hikers choose to camp here.

Keep on the track, and after walking for another hour, reach Longatulli. Inexperienced mountaineers generally stop here for a day to acclimatize. Overnight stay in Longatulli

Day 5: Longatulli – Garud Base Camp (4268m | trek 6 km | 7 hrs)
Today you will start early with packed breakfast. You will leave to catch the rewarding sight golden hour on the peaks and blue glacial lakes. Later, if you got still left energy in, a further few km treks will bring to explore into the gorge towards the foot of Changbang massif (6824 m) the highest one in area. Later trek back to camp for lunch and then trek always down to Semkhark.

Day 6: Garud Base Camp – Rishikund (4,426m) – trek back to Dronagiri (14 km | 7 to 8 hrs)
As soon as the sun peeps out, you will start the trek and descent back to Dronagiri. You will cover a total distance of 14 km in 7-8 hours. Take your camera along for clicking the pictures of the glorious landscape for your Instagram feed.

Day 7: Dronagiri – Jumma Road head Trek (11km | 5hrs)
It’s again the same route down to Jumma Road via Ruing, where your pre-arranged vehicle will be waiting to drive for Joshimath.

Day 8: Joshimath to Haridwar
Relish a scrumptious breakfast at your lodging and then head for Haridwar by road. On reaching Haridwar, transfer to the bus or railway station, and travel to New Delhi. 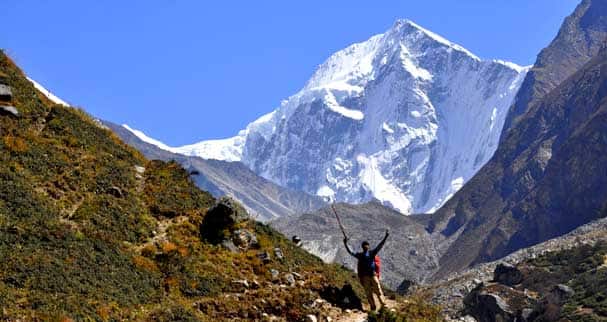 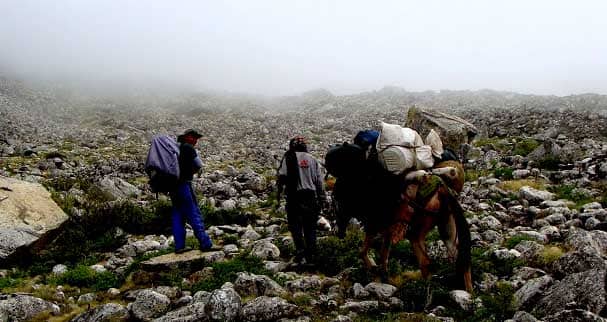 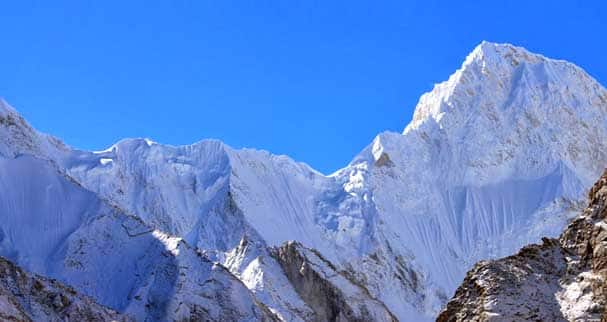 
We require a group of 4 to 5 trekkers to operate this trek.

Reviews for The Bagini Glacier Trek

Be the first to share your experience with us. Send your feedback at product@adventurenation.com